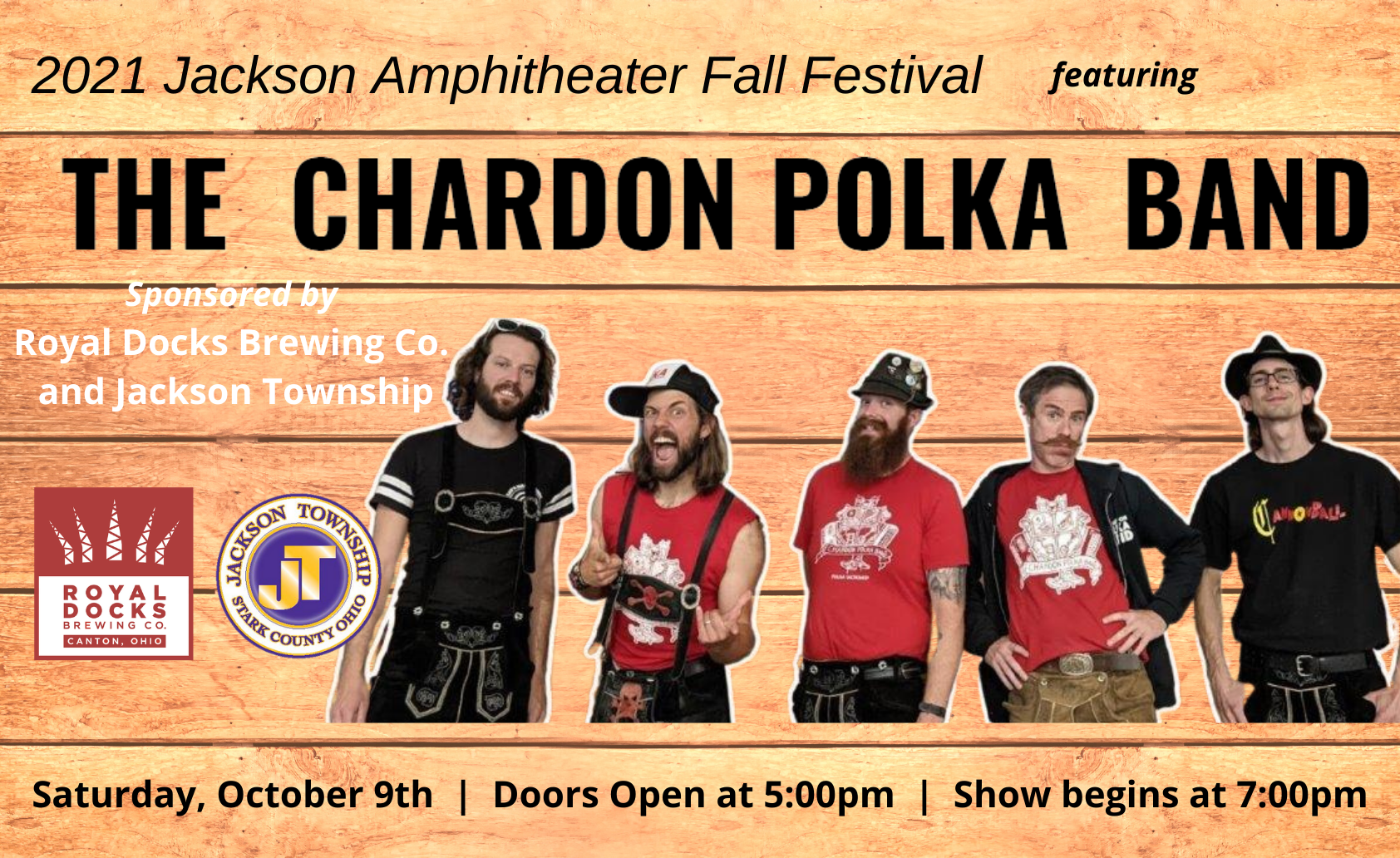 Join us Saturday, October 9 for the Jackson Amphitheater’s inaugural Fall Festival, featuring the nationally known Chardon Polka Band. A modern polka band bringing polka music to a new generation, this performance will appeal to all ages and to all types of musical interest, with their traditional polka played alongside polka-rock covers of famous songs from Queen, Twisted Sister, Lady GaGa and more.

In 2003, 16-year old Jake Kouwe was told there was no place for an accordion in his local high school’s marching band. In response, Jake recruited a group of five mismatched teenagers to form a genuine oom-pah style polka band. This group, known as “The Chardon High School Polka Band”, was a rather motley group of teenage musicians that included in the line-up an accordion, tuba, clarinet, saxophone, electric guitar, and trumpet.

The group quickly found a following in the most unlikely of places- local nursing homes. Despite their ripped jeans, high school lingo, long (and even pink) hair, piercings and tattoos, senior citizens and nursing home residents turned a blind eye to their looks and fell in love with the polka-playing teens. However, the polka phenomena wasn’t lost on their own generation. Soon, “Support Your Local Polka Band” t-shirts were being worn in the halls of Chardon High by fellow classmates and fans.

Now, seventeen years later, the band continues. What was once a high school project has turned into a career (not a good job… but a full-time one). Though the band’s unique membership has changed a few times over the years, their eclectic style and uniqueness has never wavered.

Despite the band’s sometimes gruff appearance, this delightfully eccentric gang is both friendly and outgoing. They are among the greater Cleveland area’s most recognizable performers at local parks, festivals, parades, parties and fund-raisers, and still perform regularly at local nursing homes. The polka band has a faithful fan base, ranging from senior citizens to small children, teens, and twenty-somethings.

Ohio isn’t the only place that these polka-punks are a hit. The Chardon Polka Band has become a well-known act in the fall “Oktoberfest circuit”, headlining at some of the nation’s largest seasonal events. This includes festivities in Indianapolis (IN), Helen (GA), Chicago (IL), Myrtle Beach (SC), Vernon (NJ), Tampa (FL), Alamogordo (NM), Tulsa (OK), St. Louis (MO), New Braunfels (TX), Mount Angel (OR), and many more. The band travels throughout the nation playing various other festivals and events. Their showmanship and humor has won them many fans outside the polka genre.

The band’s range of style is as equally eccentric as its members. The Chardon Polka Band plays traditional polkas reminiscent of The Lawrence Welk Show, a style that has endeared them to traditional polka fans, but sometimes morphs into punk-rock renditions of the same songs, modified to bring in a younger audience. They throw in comedic renditions of oddball favorites, bizarre audience participation songs, and even polka-rock covers of anything from Twisted Sister’s “We’re Not Gonna Take It” to Queen’s “Fat Bottomed Girls” to Lady Ga Ga’s “Bad Romance”! The Chardon Polka Band also has an ever-growing library of original tunes, many of which are featured on their popular studio albums.